Like swimming you can learn certain things only by practicing them. In IT, this is especially true for agile methods like Scrum or Kanban. Although agile methods are usually simple to understand and make perfectly sense in theory, they are difficult to master in practice. Real-life simulations, blended with some theory, offer an excellent way to experience ‘Agile’, recognize the value and last but not least: It’s fun! (I will come to the LEGO part later). In the area of IT Service Management we use at Glenfis since many years successfully various simulations like Apollo 13, Grab@Pizza or recently Polestar.  In the area of Agile we have gained extensive experience by trying out various simulations. In the following, I would like to share with you my experience with four of them: Ball Game, Paper Plane Factory, Lego4Scrum and the Scrum Challenge of Egypt.

Getting started: The Ball Game

The ball game is a very quick and effective way to practice many of the agile principles. I use it as the intro element in every Scrum Master class, ITIL CSI class and as a preparation to the Lego4Scrum Simulation – it’s just a ‘must’.

The whole simulation takes only 20 minutes and the goal is simple:  You are a self-organized team and have to get as many Ping-Pong balls from Box A to Box B. The rules are simple as well:

It’s always interesting to see how the teams evolve over the 5 sprints. The first one is always chaotic; the team maybe reaches 20 balls. But after each iteration they get better and come up with improved way to deal with the situation:

From a learning perspective the ball game is very effective. It covers many agile principles:

One downside of this exercise is that it only covers the execution side of agile (the sprints). Creating user stories, design etc. is not part of it, but that’s ok to have something to start with and to get the Agile idea.

Same as in the ball game, there are sprints à two minutes and retrospectives, but this time it’s about building paper airplanes.  The airplanes have to fulfil certain acceptance criteria and are tested by a QA person and finally the product owner at the end of each sprint (e.g. acceptance criteria: plane flies 2 meters). A line production concept has to be followed – meaning each person has to produce a part of a plane and not each person produces entire planes.   The engineering of production – the process to follow – is a team decision. You can also include a prototyping session at the beginning.

I find this simulation interesting as well. Testing if the paper planes fly (or crash) is fun.  It’s more advanced compared to the ball game, so less suited as an intro to Agile.

Lego4Scrum is what I would call a ‘full-blown’ simulation. Scrum is practiced end-to-end, from production vision to sprint execution and retrospective. It’s license-free and lego4scrum.com provides an instructor manual in 17 languages. We use our own slightly adapted version – up to 40 people with remote teams over video conference!. The required time is 2 hours minimum up to a full-day (if it is combined with some theory, the ball-game or an estimation exercises).

I usually play three sprints à six minutes; each sprint is followed by a 2 minutes review and retrospective. 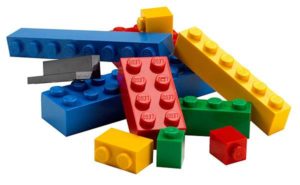 It’s also interesting to build in ‘unplanned’ things like the product owner coming up with new or changed requirements after the first sprint or team-members being ‘ill’ for a sprint. That’s real situations, isn’t it? I made very positive experiences with the Lego4Scrum simulation. Not only because it covers the whole Scrum process, but also because playing Lego is a lot of fun and the combination of both brings a big learning effect.  Although this simulation exists for about four years there is a kind of revival, maybe because Lego in general has become more and more popular around the world recently.

In the ‘Scrum Challenge of Egypt’, the Scrum team has to build a pyramid to fulfil the needs of the Pharaoh (he is the product owner).  This is a Scrum adaption of the very successful project management simulation ‘Challenge of Egypt’ by Gaming Works. This means it was developed by taking a traditional waterfall-simulation and building Scrum-elements into it, in this case mainly on the execution side. In this simulation you will therefore find traditional roles like ‘line manager’ or ‘financial management’. If you are an agile enthusiast you may think now ‘Oh no, this sound like Scrum butt’. Maybe yes, but that’s ok.  The reason is that in my opinion this simulation comes closest to the reality we find in many of today’s companies, which is often a hybrid between agile and waterfall, a ‘plugging in’ of the new into the old, a constant fight of agile teams dealing with traditional budgeting, governance and fixed scopes.  This doesn’t mean it is an ideal state (this is why I prefer Lego4Scrum), but it’s closer to the reality and this simulation shows me that mixing waterfall and agile is very problematic (which is a good experience too!). If you want to do a Challenge of Egypt simulation, you will need a whole day. For more details, refer to this excellent experience blog post from my colleague Daniel Wolf.

3 Kommentare zu «Are you talking about Water or getting wet? – Become Agile through Simulations»

RT @M_Andenmatten ONE mayor tip is: starting with ENGAGE. Engage with your customers in order to better understand his needs and his expectation on Value. Thanks Paul. twitter.com/gamingpa…

RT @Joe_the_IT_guy Better communication, open feedback, and sometimes 'just being there'. Here @sysaid dives into 15 tips on how to be a better #servicedesk manager for your team. Take a look at our latest blog here. buff.ly/2Z8ryWV